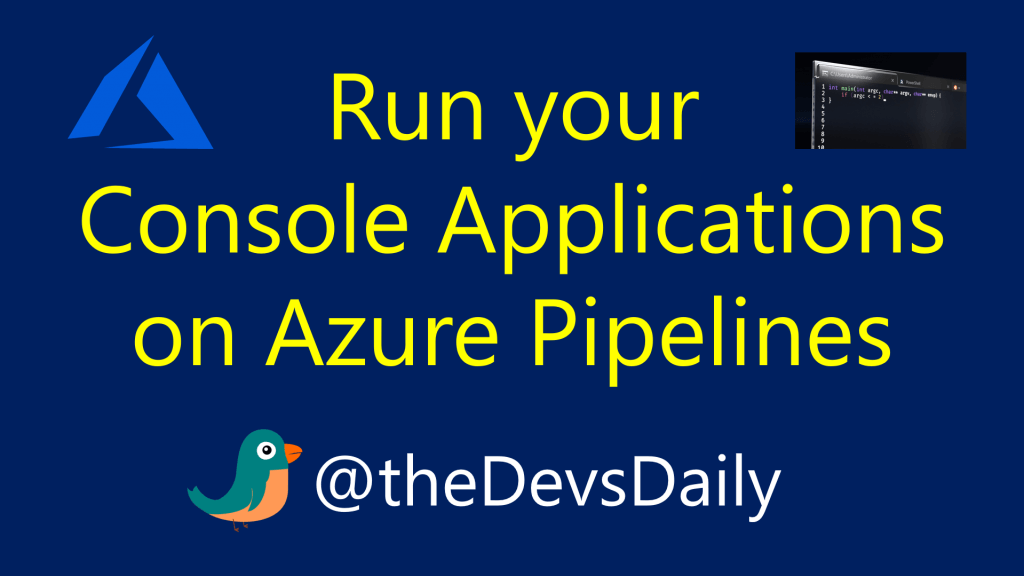 Learn how to run console apps on Azure DevOps without hosting!

If you have a subscription to Azure DevOps, you will be able to run your console app. Upload your console app and create a pipeline to run a script. Add the command and necessary arguments if any and run the pipeline.

What did I do?

In Azure DevOps, under one of demo Organizations I created a test project (“TestProject”), and initialized the empty repository with README.md file.

Published the executable. While publishing, I changed the deployment mode to “Self-contained” and enabled “Produce single file” option. It produced 2 files in the publish folder:

since .pdb file file contains debugging info, I had my concerns only with the executable (.exe) file.

I tried uploading the file in the Azure DevOps repository directly from the browser but the browser has a limitation of 20 MB max per file. So I chose to upload it using the git tools.

Finally, I setup a pipeline with a “Command Line Script” task to run the executable. Since it’s a Windows executable file, I set the Agent specification to “Windows-2019”.

In the “Script” block I just entered the file name of console app as it didn’t require any additional parameter to run.

The pipeline ran just fine and I could see the output from the console app in the logs: ?

In the pipeline, I extended the command to save the console app output to a text file. I added one more task to publish the output file in artifacts directory. I kept the artifact’s name as “pipeline-run-$(Build.BuildNumber)” in order to have different folder for every run, containing the output text file.

Now for every run of the pipeline, I could see an artifact produced, containing the output text file.

So, with that I’m wrapping this post but you can always extend the pipeline with tasks to share the console app’s output to email, or other channels. This way you can run your console apps without an App Service/WebJob/Azure Functions. The Azure DevOps platform will run the console app for you for free I guess, until they start charging. ?

Further, you can extend the pipeline with scheduled trigger to run it on scheduled time as well.

? Did I miss anything or you have any feedback? Please help me fix it by dropping a line at sunny.ksharma@outlook.com, thanks!

Buy me a coffee